This page has recent updates from the Chicago Harbors COVID-19 Task Force as well as information on current State of Illinois and City of Chicago boating policies.

On May 28th, the City of Chicago announced that it is set to enter Phase 3 of its reopening plan on June 3rd. The city has previously stated that the harbors will open sometime during Phase 3 and today the Task Force continued our dialogue with officials regarding next steps.

First of all, thank you to all the boaters who have signed the Boater Pledge Advocating for the Safe and Responsible Opening of the Chicago Harbors. Over 2/3 of Chicago Harbor boaters have signed the pledge and we believe this collaborative approach has been instrumental in supporting our push to allow the harbors to open soon.

However, despite the majority of boaters who have supported the Boater’s pledge, the negative actions of some have been noticed as well.  In spite of city orders, boats anchored in the playpen last weekend – and this has not helped our cause.  The obstructive comments on social media, specifically those advocating for irresponsible actions, boat protests (similar to what recently occurred at Lake of the Ozarks) and derogatory comments, including inference of threats and violence are hurting our effort to open the harbors.

We are all contributing to the opening of the Chicago Harbors and your actions affect the broader boating community. We want to open the harbors soon; please help us as we work to be a part of the solution.

This weekend, the Chicago Harbors will be sharing details as we learn more regarding:

On May 24th, the State of Illinois further defined it’s boating guidelines that will begin May 29th when the state enters Phase 3 of it’s COVID-19 recovery plan. Until May 29th, the current maximum occupancy of any vessel remains 2 persons.

Please note: These are the broad State of Illinois guidelines. In Chicago, the city has still not opened the harbors and once they are opened, we anticipate the city could issue its own set of boating guidelines.

The Chicago Boating COVID-19 Task Force supports the state’s new boating regulations and is proud to have contributed to their creation. We believe the regulations will allow boater’s to enjoy their boats in a safe and socially responsible way. We appreciate and support the state listening to advise from both us and other industry professionals.

The full list of new guidelines that begin May 29th, including policies for boating, regattas, charters, boat launching, fishing, and marinas can be found here: CLICK HERE TO VIEW STATE OF ILLINOIS PHASE 3 BOATING GUIDELINES

The below chart outlines new capacity limits beginning May 29th for vessels in Illinois : 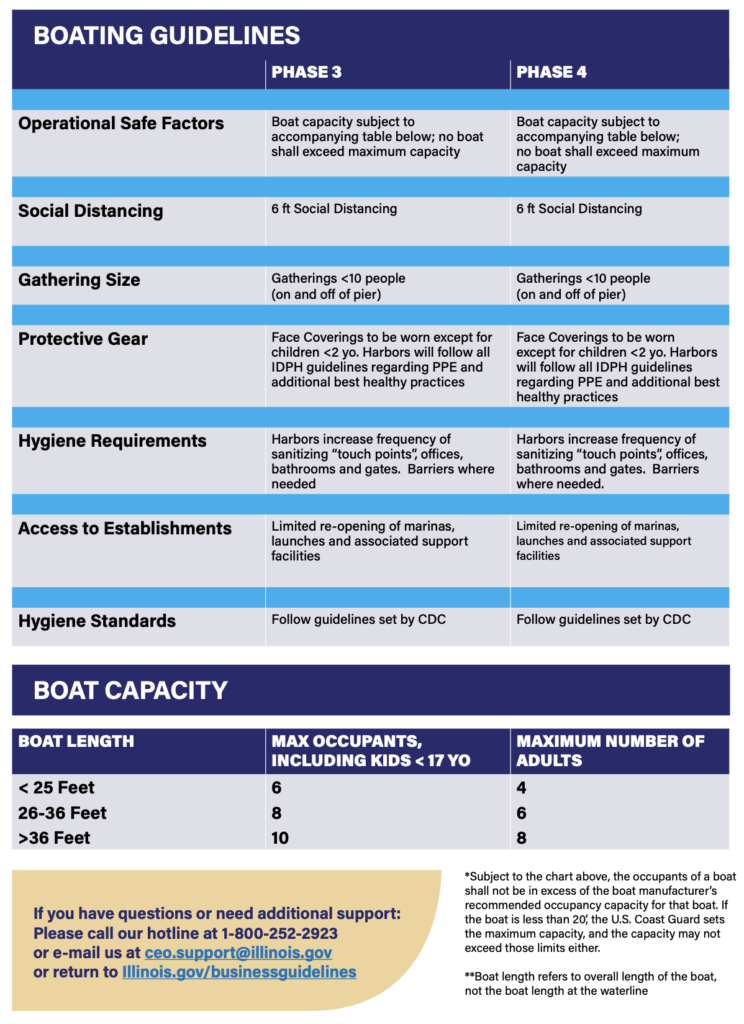 Thank you to everyone who has signed the Boater Pledge Advocating for the Safe and Responsible Opening of the Chicago Harbors. We can share that both the mayor and governor’s offices are aware of the pledge and the number of signatories. They have been impressed with the level of proactivity on behalf of the Chicago boating community and have viewed the effort very positively. Their offices are checking the number of signatories daily and we want to continue to make boater voices heard.

Members of our task force have been in direct communication with the Governor’s office this week and anticipate further positive updates.

In anticipation of progressing Illinois’ COVID-19 recovery level from Phase 2 to Phase 3 in the near future, the State announced boat capacity in Phase 3 will be limited to 10 persons or less. To clarify, the State will be announcing further clarification to the “10-person rule” and we expect a graduated capacity limit relative to boat size.

Both our Task Force and the Park District have been in direct contact with the mayor’s office on policy updates regarding the lakefront. We anticipate that once the State issues their detailed recommendations, we will receive further clarity from the city regarding any opening of the lakefront.

Knowing that many Chicago boats are in the process of being launched, we have been specifically speaking with the Park District on a proposal to enable additional boaters, beyond Chicago Harbors winter storage customers, to begin staging their vessels at our 31st Street and Montrose harbors. We will update with further information as we have it.

The Chicago Harbors COVID-19 Task Force is asking boaters to please sign the following pledge as part of our united effort to commit to boating safely once the harbors open. Please click here:

Led by the Chicago Harbors, the task force includes:

Formed March 26th, the task force has been working in coordination with the Chicago Park District to make recommendations on how to open boating safely while also reporting on the economic impact of current closures on local marine businesses and keeping Chicago officials apprised regarding boating policies in neighboring states and municipalities.

The task force’s recommendations most recently resulted in the opening of the Chicago Harbors’ boat yards on May 4th to help boaters prepare for the upcoming season.

“We want Chicago boaters to know that we’re advocating for them and want to see them on the water as soon as possible,” said Chicago Harbors General Manager Scott Stevenson. “We are still planning on having a great 2020 boating season and this requires a safe and responsible opening of the Chicago Harbors.”

Boaters can expect to hear further updates soon regarding current proposals under consideration including:

“As boaters, we have a social responsibility to demonstrate to the city that boating is a safe social distancing activity and it will require all of us, working together, to get the boating season underway,” said Chicago Yacht Club Commodore Lou Sandoval. “We’re making progress towards this front and thank the boating public for their patience and understanding during this unprecedented time.”